Watch this quick video (12:05) for introduction to NLPCraft CLI:

NLPCraft CLI bin/nlpcraft.{sh|cmd} script is a central management utility for NLPCraft that supports interactive REPL and command line modes. Most of the functions this script does can be done through running Java applications or using REST API - yet using this script you can perform the same tasks much simpler and quicker. From starting and managing REST server and probes, running various built-in tools, to testing models via REST API - NLPCraft CLI provides a single centralized utility that makes a quick work out of all these routine tasks.

The script is only available in either official Apache source ZIP or in binary ZIP distributions. If you used Maven or similar build tools to add NLPCraft to your project as a dependency, this script will not be available out-of-the-box - you will need to download ZIP distribution separately.

The script is located in /bin sub-folder of the installation root and is available as nlpcraft.sh for and nlpcraft.cmd for environments. Both versions provide identical functionality.

The bin/nlpcraft.{sh|cmd} works in two modes:

All the functionality and command syntax remain the same regardless of whether a command is executed from a command line or in REPL mode.

To get started, run bin/nlpcraft.{sh|cmd}:

Script starts in the REPL mode by default.

Note that when using start-server command the default user account is automatically signed in upon the server start and the access token is obtained. You can sign in with different user account, if necessary.

Type help to list all supported commands (or run bin/nlpcraft.{sh|cmd} help if in command line mode): 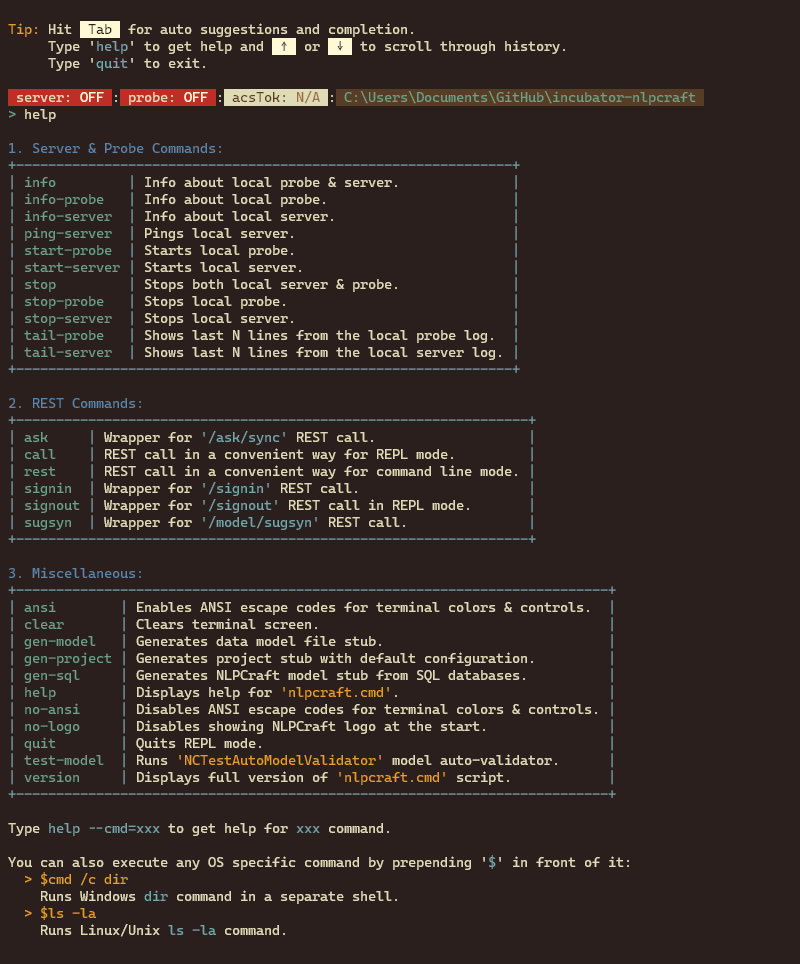 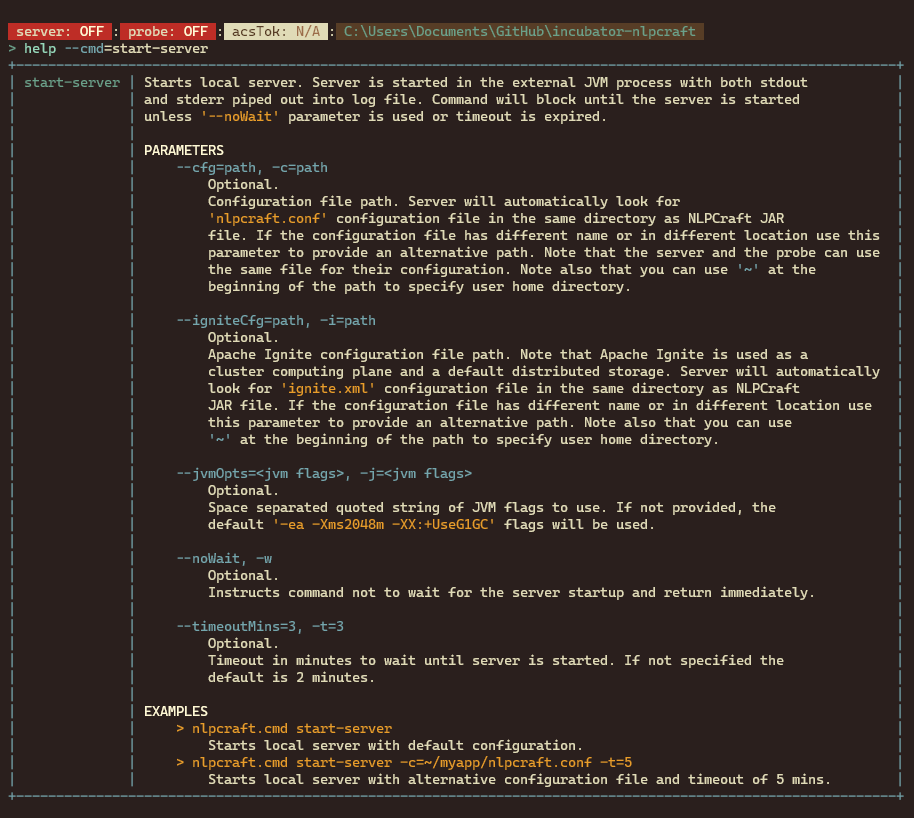 Use Tab key anytime for auto-completion for commands, parameters, file system paths, and model class names. Use ↑ and ↓ keys to scroll through command history.

To exit bin/nlpcraft.{sh|cmd} script in REPL mode use quit command.

You can run any external OS-specific commands from bin/nlpcraft.{sh|cmd} script by prepending such command with a $ symbol. For example:

Note that stdin, stderr and stdout of the new process will inherit from running bin/nlpcraft.{sh|cmd} script process. Running OS commands makes the most sense in REPL mode where you don't want to lose a session context while executing external OS commands. Technically, however, external OS commands can be executed from command line mode as well.

NLPCraft CLI is standard command line utility that can be used in the familiar ways both in Linux/Unix/MacOS and Window environments.

Here's the typical workflow of working with NLPCraft using NLPCraft CLI. Note that although all of these steps can be performed from IDE or a command line - NLPCraft CLI in REPL model provides the easiest way to accomplish these tasks:

Steps 3 and 4 define a typical development cycle for change, build and test. In most cases you don't need to restart the server between multiple sessions.

REST server is a fire-and-forget component in NLPCraft. You can start it once and you only need to restart it if you change the server configuration. It is customary to add bin/nlpcraft.{sh|cmd} start-server call to the OS init script to have it started automatically on boot up.

It is recommended to modify the standard nlpcraft.conf configuration file, i.e. in a standard installation location. Commands like start-server, start-probe and test-model use this location by default and you will not have to specify alternative location or provide other overrides every time you run these commands. If you keep all your configuration modifications in the standard nlpcraft.conf file you can simply run these commands without any additional arguments - significantly simplifying their usage.

NLPCraft CLI can be used in your own scripts to automate your own specific workflow and tasks. All of the commands that utilize REST API produce JSON responses, for a example:

You can parse these JSON responses for your own needs in your scripts. For example, here's the code snippet to get the access token from the signin command (on Linux):